DC Department of Parks and Recreation, along with the DC Commission on the Art & Humanities, wanted to have the 1st Annual Chuck Brown Day at the Chuck Brown Memorial Park. The ANC said “cool”. What the ANC and the residents around the small park that hosts the Chuck Brown Memorial didn’t anticipate was the 3,200+ people saying that they were going to attend the event, which is scheduled to be from 4-8pm, and host live bands.

That’s right. More than 3,000 people have said that they will attend the event. If you have ever been to this park, you know that 3,000 people would never be able to fit in this area. Area residents 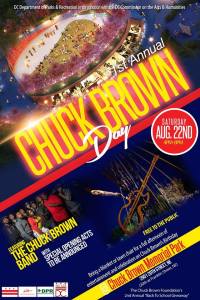 fought against a larger Chuck Brown venue back when the memorial was first proposed, in order to avoid this kind of disturbance from occurring. Let’s be clear on my position (and many others): this is about the amount of people in this small area. Not a good idea for the people who live in the area and also not a good idea for people to enjoy themselves who do attend. I’m all for a memorial concert for Chuck Brown… but host it somewhere that can accommodate that many people. What do they have to say about it now? Here are a few comments from emails sent over to me, and to Popville:

My husband and I first learned of an event to honor Chuck Brown at Langdon Park via a DC blog today.  Our home is located at [removed for privacy]; therefore, this event will essentially be held in our backyard.  We strongly oppose the event, and urge you to cancel it.  If you proceed, we suggest you move it to another location that is more suitable to accommodate the very large number of people who are interested in attending.

There have been no released details of the event organizer’s plans (if indeed plans exist).  The Facebook event page currently states that there are over 3,000 people scheduled to attend.  There has been no communication about security or crowd control.  We chose this neighborhood because it is quiet and residential.  This is the opposite of those things.  We’re extremely concerned that this event will cause an increase in crime that day, and possibly after that day.  We’re also concerned about litter that will most certainly be left behind in the park, streets, alleys, etc. Residents will therefore shoulder the brunt of cleaning up after the event.  This park is simply far too small to accommodate an event like this; frankly, I’m shocked and angered it has been allowed to proceed (especially without speaking to the neighbors whose properties back directly onto the park).

If the city were to decide to proceed with the event, there should be a ticket system (free or otherwise) required to control the number of people who attend (I understand the park design was made to accommodate up to 300 people, so that should be the absolute max).  Neighborhood parking should be prohibited for non-residents during the event.  And there should be a clear plan, in terms of crowd control, security, and trash-pick up.  But the event, as scheduled, should not be allowed to proceed.

One thought on “3000+ People to Descend on Langdon”