Last night, I received an email stating that Mayor Fenty, Chief Lanier, and DCRA Linda Argo will be holding a 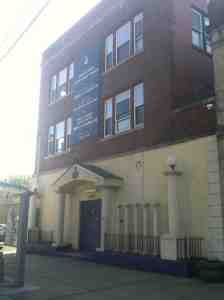 press conference in front of the King Solomon’s Temple at 2245 Rhode Island Ave NE. This morning, I got another email indicating that they were canceling the press conference. I walked over to the Temple regardless. Sure enough, there was press there (WTOP and some others), two members of the Temple, and a couple of residents. WTOP was interviewing the head (I presume) of King Solomon’s and the resident. The head of the Temple was explaining that they are figuring out what is going on and what they can do to keep the Temple open. The resident stated that they need to talk to all of the residents in the community about their issues.

What I found was interesting was that the head of the Temple was attempting to sound as if he was unaware of the issues, that the issue was only to do with teenagers there, and that the Mayor was only interested because it is going to be election season (I think he was calling Fenty an opportunist).

Well, to counter these statements, I know that this head of the Temple was present at the teenager parties so he was aware of the issues, the issue is not just with teenager parties but the adult parties also, and the Mayor is responding to our concerns.

It appeared they were squirming in their interviews probably because they got the same media advisory I saw this morning from the Mayor’s office:

Mayor Adrian M. Fenty and District officials will announce the closing of a Ward 5 Masonic Lodge after repeated disturbances and violent incidents.

The official who informed me of the press conference told me via email that he will send me an update from the Mayor and DCRA as soon as possible. Once I hear, I will let you know.