Mayor Vincent Gray announced this morning, in front of a crowd gathered at the WACIF offices along Rhode Island Avenue NE, that Rhode Island Avenue has been officially designated a part of the Main Street Program, and that the Friends of Rhode Island Avenue (FoRIA) have been chosen as the administrators of the Program for Rhode Island Avenue NE. Kenyan McDuffie, Ward 5 councilmember, and FoRIA Chair, James Holloway, spoke about what this designation will mean for the Avenue and how much more work we all have as a community to go to get a vibrant and revitalized Avenue that all residents can enjoy. They were also joined by Local Business Development (DSLBD) Director Robert Summers.

As the Insider, I am especially proud to see this organization become such an important fixture in the community given its roots and beginnings with this blog more than two years ago. Congratulations to all of the “Friends” that made it happen along the way!

DC Main Streets, which is managed by the Department of Small and Local Business Development (DSLBD), provides resources for local organizations to leverage private investment through public and private partnerships while revitalizing existing commercial corridors and historic landmarks. The program serves small businesses, which are a driving force for the local economy. See FoRIA’s press release here and posted below. 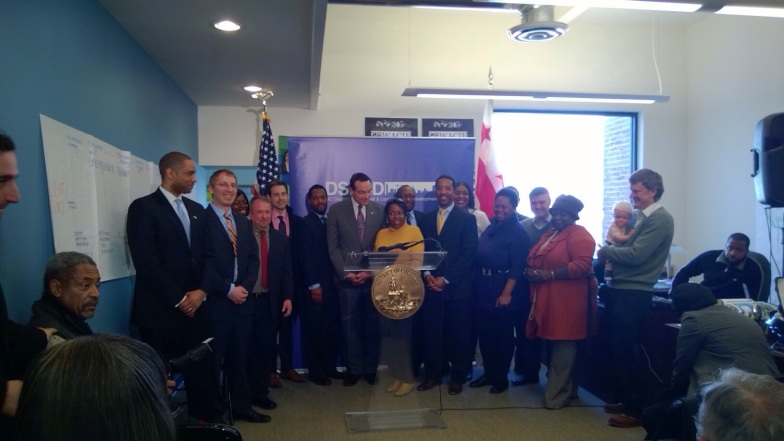 “We are thrilled to have this opportunity,” said James Holloway, Chair of the FoRIA Board of Directors. “For a long time, the communities that surround Rhode Island Avenue NE have asked for more restaurant and retail options within walking distance of their homes. FoRIA’s goal has always been to work with the community to build the type of vibrant commercial corridor that will not only serve this amazing and diverse community, but will also be an opportunity zone where locally-owned businesses can thrive.”

The DC Main Street program has been in existence since 2002, and provides resources for local organizations to leverage private investment through public and private partnerships while revitalizing existing commercial corridors and historic landmarks. The program serves small businesses, which are a driving force for the local economy. In the last year alone, DC Main Streets programs have created more than 470 new jobs in the District. DC’s program was created through the National Trust for Historic Preservation, and utilizes the National Trust’s Main Street Four-Point Approach® for commercial revitalization.